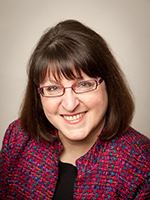 Harriet Drummond lives with her husband, Elstun Lauesen, in the North Star neighborhood, where she's been a homeowner since 1984. Harriet is a graphic designer, self-employed since 1981, providing professional services in print design to the business and non-profit community. She worked for printers, architects and engineers in her early years in Alaska.

When her children entered school in the late 1980s, she took an interest in the Anchorage School District and its overcrowded facilities and in 1994 got elected to the Anchorage School Board, where she served three consecutive terms. Voters approved over half a billion dollars in school bond issues during her tenure that built and restored schools all over the district, including the new Kincaid and Lake Hood Elementary Schools and Dimond High School in West Anchorage.

Upon retiring from the school board in 2003, Harriet continued her neighborhood activism through the North Star Community Council, serving in many positions including chair, and as a delegate to the Federation of Community Councils, where she also served as chair.

Harriet grew up in New York City and earned a bachelor of science at Cornell University in 1974. She’s lived in Anchorage since 1976, almost entirely in West Anchorage. Harriet was elected to the Anchorage Municipal Assembly in 2008 and the Alaska State House of Representatives in 2012.