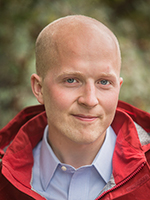 Jonathan was born and raised in Sitka, and achieved the rank of Eagle Scout while growing up. He attended Yale College for three years before leaving school early to run for the Alaska Legislature.

Jonathan's legislative focuses include growing Alaska's fishing economy, sustainable rural economic development, growing Alaska's knowledge economy, and celebrating and revitalizing Alaska Native culture and language. His 2014 legislation enshrining Alaska's 20 Native languages as official languages of the State of Alaska attracted national attention. In 2014, Jonathan was recognized by the Washington Post as one of its "top 40 under 40" in American politics.

In addition to his work, Jonathan enjoys distance running and outdoor adventure. Jonathan also plays cello and double bass, and has twice toured through rural Alaska with a piano trio sponsored by a performing arts grant from the Rasmuson Foundation.