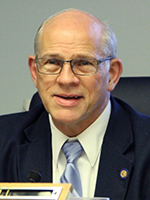 Other Political and Government Positions

I am a third-generation Alaskan. I was born in Fairbanks and raised in Nenana. During my first semester at UAF, I received my draft notice and enlisted in the Air Force. After I served five years in the Air Force, I went back home and worked with Dad at Nenana Fuel Co. After I met my wife Luann, we married and moved to Fairbanks. Together, we built our log cabin and raised our children. We are both very active in our faith. Through our church, I have served in jail ministries, worked as a biblical family counselor, taught adult classes to strengthen families, and served as the Pastor’s Administrative Assistant. I am a Constitutionalist and a conservative republican.