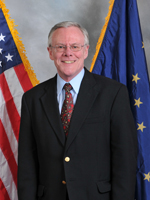 Juneau Senator Dennis Egan hails from the capital city he now serves. Born in 1947, he graduated from Juneau Douglas High School in 1965. His father, Bill Egan, was Alaska’s first governor. Dennis graduated in 1967 from radio operation engineering school and was a U.S. Army radio communications school honor graduate. He put those skills to work serving in the Alaska Army National Guard 910th Engineer Company from 1967-1974. Named Alaska broadcaster of the year in 1990 and inducted into the Broadcasters Hall of Fame in 2001, he has over 30 years on the Alaska Broadcasters Association board. Dennis was president and general manager of Alaska-Juneau Communications, Inc. since 1986. As host of KINY-AM’s "Problem Corner," he may be the only Alaska politician who has as many voters recognize his voice as his name.

Serving the Capital City is nothing new to Sen. Egan. He’s been mayor, an assembly member, deputy mayor and planning commissioner. He’s served on the boards of directors of the Juneau Chamber of Commerce, AK Municipal League, and Southeast Conference.

His civic involvement has been as dynamic as his radio and political career. Dennis currently serves on the boards of the Alaska Committee and Juneau Jazz & Classics, and is a member of Juneau Rotary, the Salvation Army Advisory board, and the U.S. District Court Merit Selection Panel. He is a member of Ducks Unlimited. Past involvement includes membership on the Junior Acheivement Hall of Fame selection committee, Communication Chair Golden North Salmon Derby, Elks 420, June Yacht Club, and the St. Jude Center board member. He was a volunteer firefighter for 12 years (1969-1981).

Dennis married Linda in 1969. They live on Douglas Island and have two adult daughters, Jill and Leslie.