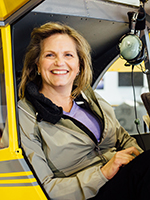 DeLena Johnson, state representative for District 11, Palmer, Alaska grew up in Talkeetna, a small community with less than 900 people. She graduated from Susitna Valley High School in 1981, married her husband, Steve Johnson, and went on to earn a bachelor’s degree in Mathematics from UAA and an associate degree in Electronics from Mat-Su College.

DeLena and Steve raised and schooled their five children in Palmer and now have three grandchildren. In 1984, DeLena started an award-winning property development company specializing in unique Alaskan properties. She went on to serve as president of the Palmer Museum of History and Arts, and she served two terms as Mayor of the City of Palmer, eventually being elected President of the Alaska Conference of Mayors.

DeLena continues to focus on long-term safety, financial stability, and the prosperity of her constituents. She remains committed to being pro-life, fiscally responsible, and conservative.