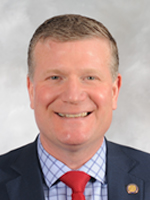 Chuck Kopp, a lifelong Alaska, is the son of educators and entrepreneurs that moved from Anchorage to Iliamna near Bristol Bay. Chuck has a B.A. in Justice from UAA and chose a career in public safety that spanned over 20 years. He served in the Anchorage and the Kenai Police Departments and graduated from the National Training Center of Polygraph Science as a Certified Expert Polygraph Examiner, skills he put to use in successfully resolving three homicides on the Kenai Peninsula where the victim's bodies were never recovered.

He served 7 years as the Chief of Police for the City of Kenai, and as Acting City Manager from 2005 - 2006. Alaska Governors Murkowski and Palin both appointed him to an oversight role on their transition teams with respect to the Department of Public Safety. Chuck served his community coaching high school wrestling at Region II schools, serving on boards and was Co-Chair of Security for the 2006 Arctic Winter Games committee. He is an Alaska's "Top 40 under 40", and was inducted into the first inaugural class of the Alaska High School Hall of Fame for outstanding performance as a multisport athlete. Chuck has served the State of Alaska as a Governor appointee to both the Alaska Judicial Council and Alaska Police Standards Council. Most recent, he has been Chief of Staff for two State Senators. Chuck and his wife Trish have been married 28 years and have three children.