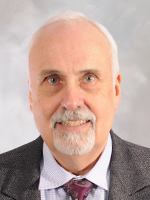 Representative LeBon has called Fairbanks home since 1972. He came to Alaska on a basketball scholarship to the University of Alaska Fairbanks where he went on to graduate from the UAF School of Management in 1975.

In 1976, he married his wife and fellow UAF graduate, Mary, with whom he has two daughters, and five grandchildren.

LeBon is proud to have joined the 75,588 Alaskans who voted to amend the Alaska Constitution in 1976, and establish the Permanent Fund to pass the prosperity generated from the development of Alaska’s oil and gas resources to future generations of Alaskans.

LeBon worked in the Alaska banking industry, beginning as a loan officer for Alaska National Bank in 1975. In 1979, he went on to work for National Bank of Alaska rising to the rank of Vice President/Commercial Lender before taking a position with Mt. McKinley Bank in 2000, where he retired as Executive Vice President/Chief Credit Administrator. He credits his 42 years in the banking industry to help build his appreciation for entrepreneurship and business development across Alaska.

LeBon’s passion for a strong local K-12 public education system for Fairbanks, where his two daughters were students, led him to run and be elected to the Fairbanks North Star Borough Board of Education in 1998, where he went on to serve as board president from 2001-2003.

His involvement in the local community also included him serving on several local boards and organizations including the Greater Fairbanks Chamber of Commerce, the Fairbanks Downtown Association Board, the Interior Community Health Center Board, the Fairbanks Economic Development Corporation Finance Committee, and the Alaska Airlines Community Advisory Board.

In 2016, LeBon was named to the UAF Nanook Hall of Fame and is the proud namesake of the Bart LeBon Humanitarian Award given to a UAF student-athlete who volunteers in the local community. He remains a strong supporter of the University of Alaska athletics programs and youth athletics in the Interior.

In 2018, LeBon was elected to the Alaska House of Representatives by a single vote. He believes strongly in developing Alaska’s natural resources, a stable regulatory environment to foster economic development, and a sustainable fiscal plan for Alaska and future generations.

In his personal life, Rep. LeBon is a devoted father and grandfather, an avid basketball fan, snowmachine rider, enjoys taking his Harley on road trips whenever the weather allows, and is known to cut his neighbors’ grass with his John Deere riding lawnmower.