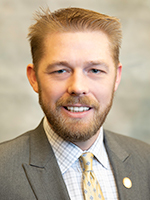 Josh Revak grew up on a family farm in rural Minnesota, where he learned the importance of hard work, community, and family. At age 20, following the events of September 11, 2001, he enlisted in the U.S. Army. He served a full tour in Iraq as a main battle tank crew member with the 1-37 Armor, 1st Armored Brigade, 1st Armored Division, under the leadership of Major General Martin Dempsey. In his second tour of Iraq, Revak was severely wounded by an enemy mortar attack.

After being honorably discharged from the military, he continued to dedicate his time and energy toward serving his community in Minnesota. In 2008, Revak earned the Commander's Award for Public Service, a civilian medal awarded by the Adjutant General of the Minnesota National Guard.

In 2009, Revak moved to Alaska with his wife Marta and his two daughters, Keilah and Sydney. He was soon hired by Congressman Don Young and served as the congressman's Military and Veterans Affairs Liaison and Advisor for six years. During that time, he also earned a Master of Business Administration degree from Alaska Pacific University. In 2016, Revak was hired by Senator Dan Sullivan, where he worked for over two years in the Anchorage office spearheading issues related the Department of Defense and the Department of Veterans affairs.

In 2018, Revak ran for-and won-the House District 25 legislative seat. Shortly thereafter he was honored to be appointed to the Senate District M seat, where he now proudly represents the Huffman, O'Malley, Abbott Loop, Independence Park, and East Dowling areas of Anchorage. Senator Revak is humbled to serve his neighbors in District M and vows to continue to work hard to provide the safe streets, good schools, and economic opportunities needed to ensure a bright future for our children and our amazing State.