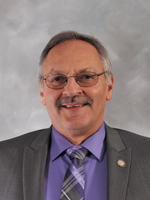 Residency in Alaska:
David was born in Ellensburg, Washington and moved to Suntrana, a mining community next to Healy when he was 13 years old with his family. He is one of 4 sons of Frank and Doris Talerico.

Family:
Married at 19 to his wife Peggy They have been married 40 years. They have 2 grown children Danielle and David and 6 grandchildren.